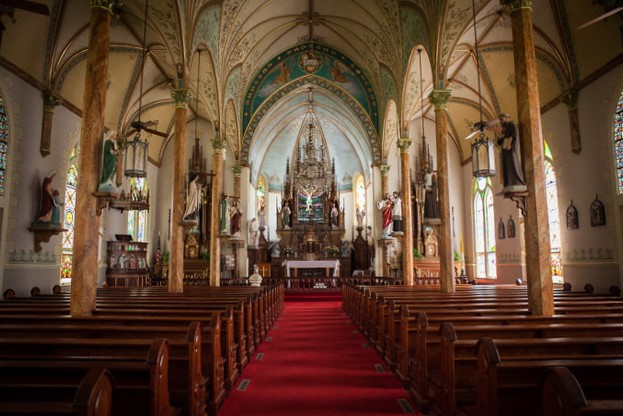 The Painted Churches of Schulenburg, 19th-century structures built by Czech and German settlers that look austere from the outside but boast brilliant-hued frescos and gold-framed icons inside, are far more famous in this region of Central Texas, but there are additional churches within Fayette County worth closer examination.  The Schulenburg Chamber of Commerce offers guided tours of the painted churches around Schulenburg.

The Painted Churches are located in the communities of Dubina, High Hill, Praha, and Ammannsville. They appear unassuming as you approach them, but as you enter the front doors prepare to have your breath taken away by the incredible beauty found inside.

To book a tour of the Painted Churches or for more information, please call (979) 743-4514. The churches are all active and do conduct services on Saturdays and Sundays. You may tour the churches Monday-Saturday 9:00-4:00pm, but please be respectful of any events or services that you may encounter. In addition, the church at Praha requests that all visitors be out of the church by 3:00 on Saturdays.

The Round Top Antique Shows, held each Spring and Fall, is recognized as being one of the best antique shows in the nation.

The twice-yearly event attracts an estimated 100,000 vendors and shoppers to event venues in Round Top, Warrenton, Carmine, Burton and Fayetteville, as well as neighboring communities. The venues in these communities are collectively referred to as the Round Top Antiques Show; Round Top’s Rifle Hall was the original site of the first show in 1968.

Some 65+ venues feature a wide variety of treasures, from international and American antiques, to vintage, repurposed, reclaimed and recycled items. Junk, architectural remnants, clothing, jewelry, artisanal foods and even new items are available. Many venues or fields will have all categories represented in their dealer offerings, with an estimated 2,500 dealers setting up — some who set up in multiple venues.

Das Meyer Haus is a great location to act as your base for going to all the venues in Fayette County. 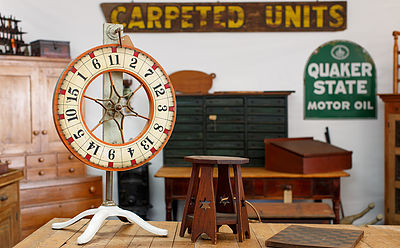 Fayette County has a tradition of good food. German and Czech immigrants brought their appetites for fresh food with them when they arrived in the 1800’s. The county has a variety of butcher/meat markets that sell fresh cut beef and pork as well as smoked meats and sausages. Here are our favorites: 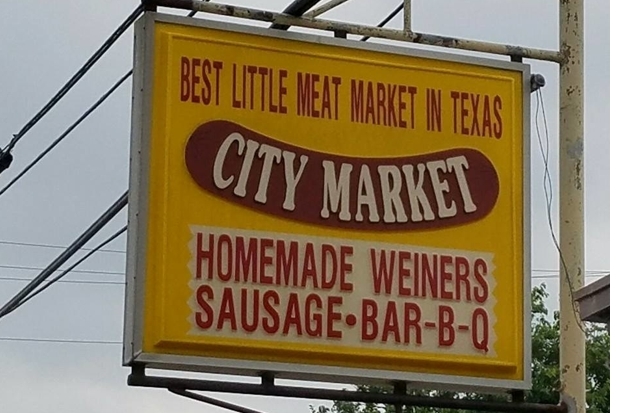 Monday through Friday this meat market serves up fresh beef (steaks are really great), pork and chicken along with sausage and frozen meats from La Boucherie (Turducken and other Cajun favorites). On Saturday mornings they also fire up their pit and offer BBQ beef, chicken, pork, and turkey, first come, first served until they run out – usually about noon.

Located in High Hill, this meat market serves fresh cuts of beef, pork, chicken, quail, & fish. They also have jerky and smoked sausages of many types. Some of the best hard sausages we have tried! 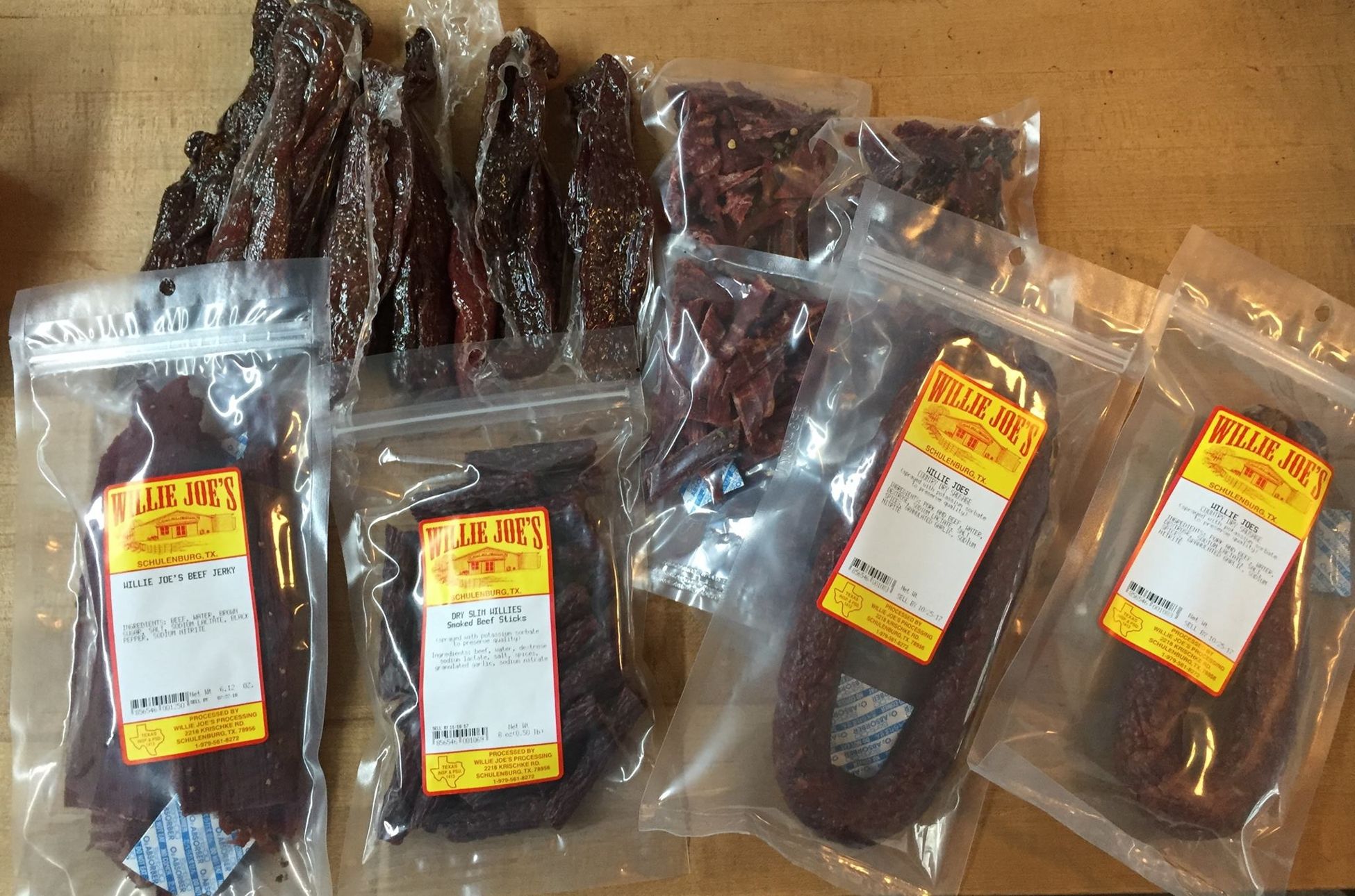 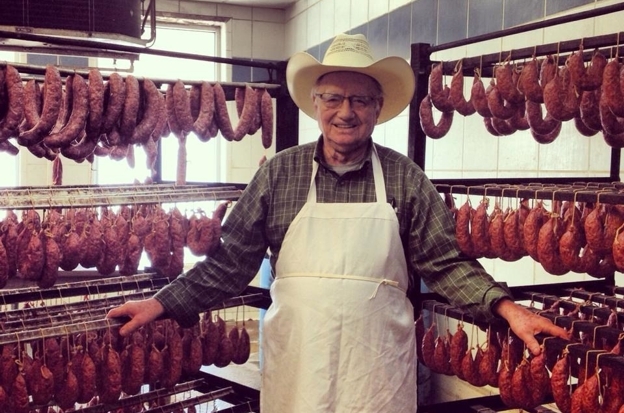 Kaspers Meat Market is a small-town meat market located in the heart of Weimar, Texas. The Kasper family has been serving quality meats since 1917. As you enter through the screen doors, you will find that not much has changed through time. The small market serves a variety of meat products and is well known for its jerky as well as its pork and beef sausage, also known as “Weimar Sausage”.

Ranch–to-table Wagyu beef and fresh pork meats. If you want to cook up an exquisite steak at home, this is your place. It's pricey, but worth it if you're into really good cuts of meat. They're very friendly, and will go out of their way to accommodate you. 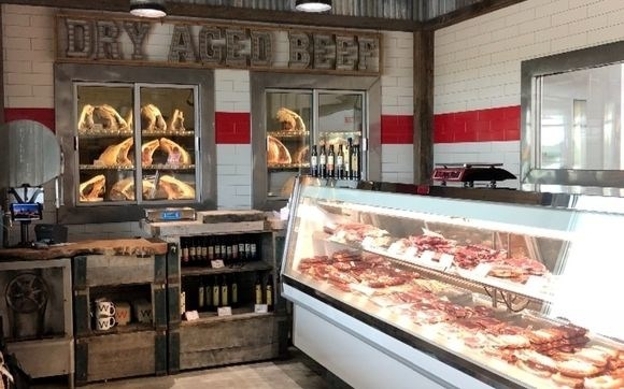 Cows are a big deal in Fayette County. According the Census of Agriculture (yes, it really does exist) of 2017, there are 96,079 head of cattle in the county. Many of those are the Jersey breed from the British Channel Islands. If you do any siteseeing in the county then you will see cows on the move, and if you take a half day for the Jersey Barnyard experience then you will see where these Jersey’s are going – which is the milking barn (called a parlor)! Take a look at the places where you can find fresh dairy in the county. Jersey cows also produce milk that is high in protein. 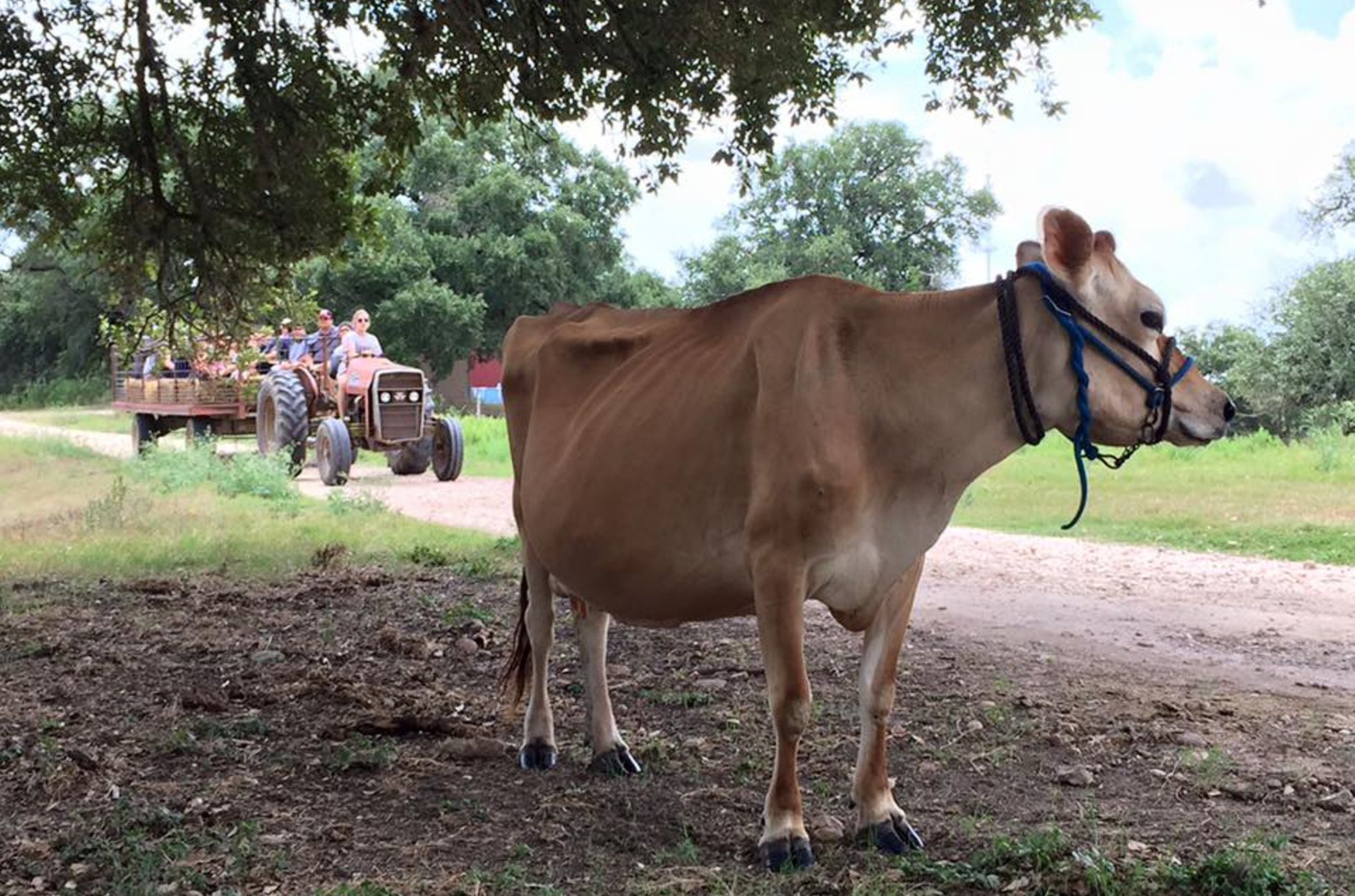 Guided tours are $10 per person, pay $2 for a calf bottle and have the time of your life feeding a Jersey calf! The store has raw, whole non-homogenized milk from grass fed Jersey cows. Cheeses include mild, jalapeño and sharp cheddar and pepper and Monterey Jack. Free-range chicken eggs are available by the dozen.

Familiar Czech recipes include kolaches, sausage rolls and many other pastries, which are rich in flavor because they use lots of milk, butter, and cheese. That is probably one reason that dairies are always popular in Czech communities. Stryk offers whole raw milk, Cheddar Cheese (Plain, Black Pepper, Red Pepper, Chipotle, Cumin, or Caraway), and Texas-shaped cheese gifts. 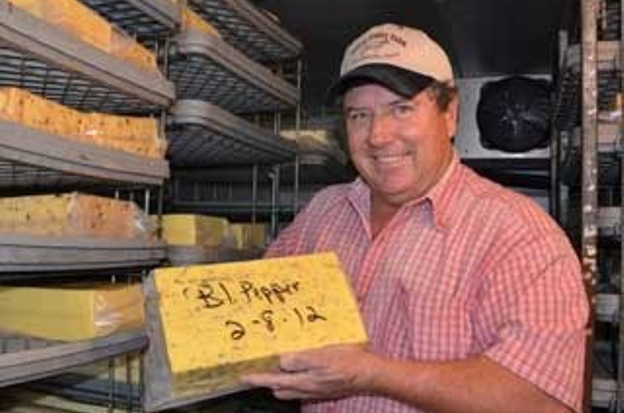 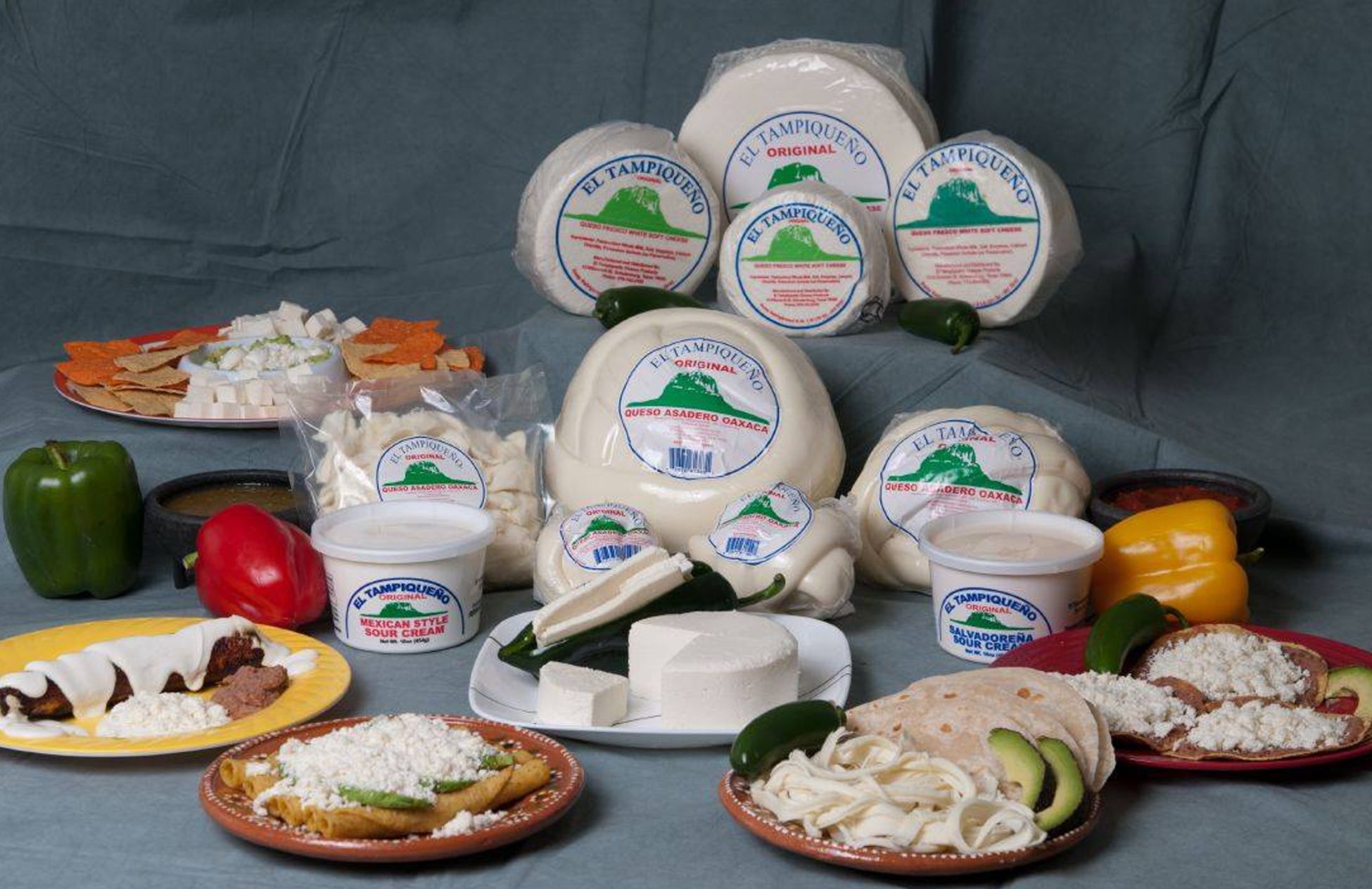 A family business dedicated to the production of typical regional cheeses and creams, which specializes in Oaxaca cheese, Mexican cream and Salvadoran cream in different forms and sizes. Each product is unique and made with 100% natural product. This is the processing plant for their cheeses, some of which can be found at the town's grocery store, Arlan's.

The dairy sells raw milk, yogurt, gelato and creams. The store is part of Four E Dairy, a family dairy farm named after farm founder Ernest Sr. and his three sons Ernest Jr., Erwin and Eugene. Chad Chaloupka—grandson of Ernest Sr. and son of Eugene and Elyse Chaloupka—is the third generation to manage the dairy farm.

At the same location is Lira Rossa Artisan Cheese. Andrea Cudin, owner, makes fresh, homemade cheeses made from original Italian recipes in a small building in the Four E Dairy in Moulton. The building is always open, and Lira Rossa operates under the rule of the honor system. Andrea Cudin is from Friuli, a mountainous region in northern Italy. Cudin brought old-world recipes from the Friuli- Venezia Giulia region of Italy to the Crossroads when he moved to the area with his wife, Jillian.

The most popular cheeses are latteria, mozzarella and ricotta. The latteria, made from raw milk according to an original Friuli-region recipe, is the signature Alpine-style cheese. The flavor is “delicate” and “strengthens and becomes more aromatic with age.” Other varieties include caciotta, ricotta affumicata and formadi frant. 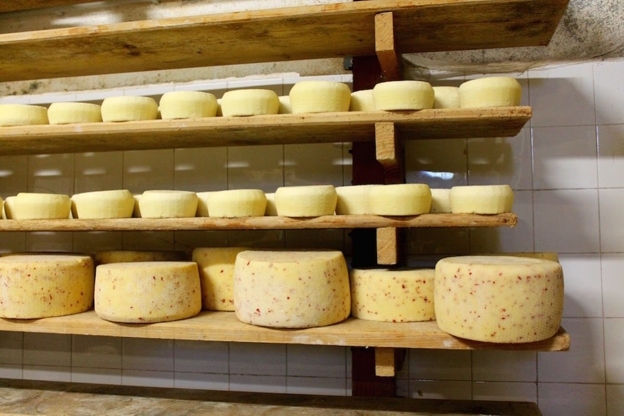